Ever wish you could go behind the scenes with an author or a book? Voila!

Some of you may have read this fact first in several of the interviews that came out of my blog tour, during which I was asked several times how the story came to be. Well, I was driving down Central Avenue. I think I was on my way to college, but I don’t remember precisely. What I do remember is The Sound of Diamonds.

At the time, I had no idea what that meant. By the end of the summer, I had written a book explaining it. 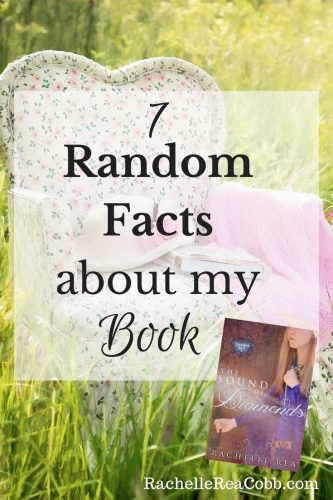 Because I’m near-sighted and conscious of that fact. And, yes, glasses had been invented by 1566 when my Gwyneth is wearing them. They were just extremely expensive. No problem. She’s of a respected English noble family; thus, she even has a back-up pair.

I didn’t plan this. I’m not sure how this came to be, in fact. But I picture him like this, although admittedly that’s a black-and-white photo.

Gwyneth’s Catholic. Dirk’s Protestant. At a time where that was a very Big Deal. So to make things even more tense, a monk came strutting on stage and became a friend of both, upsetting the status quo in a good way.

5. My dad picked the name for one character.

He didn’t know it. We were talking about old movies and he started waxing eloquent about how he loves the name Ian, how it’s a proper English name, how it sounds awesome, how maybe he could have convinced Mom to name one of my brothers Ian (if we didn’t have the everyone’s-name-starts-with-R thing going). Thanks for the idea, Dad!

6. There may or may not be a food fight in this book.

Yep, a food fight. Chapter Thirty-Four is all I’m going to say. ;)

7. Yes, there is an actual sound of diamonds.

I hear it as the sparkly, falling-rain sounds at 0:07 of this song.

And there you have it, the actual sound of diamonds! Or is it? You just may have to read the book to find out. ;)