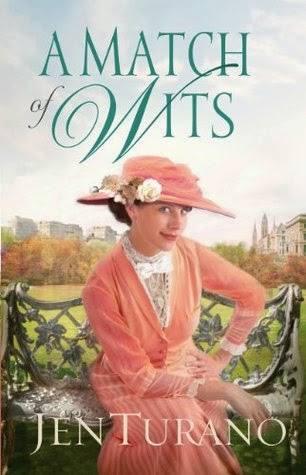 Everyone else may think them a match, but nothing could be further from the truth–until Agatha finds herself in real trouble.

I finished this book last night–it was just as delightful as I found A Talent for Trouble to be. Jen Turano’s writing style is uniquely funny and kept me reading about Agatha’s adventures long after I should have turned out the light.

Now I’m on a quest to read Jen’s other books. She writes in a fresh and amusing way that doesn’t distract from the intriguing storyline; besides, I’m always a fan of strong heroines who are daring enough to take things into their own hands–and heroes who insist on trying to save them anyway.

And there’s plenty of saving to be done in A Match of Wits. Not only is Agatha a talented journalist, she’s one with an assassin after her.

But Agatha gets to do some saving of her own, and he goes by the name of Zayne Beckett. A heartache and injury have Zayne beaten down, but a little dynamite is all Agatha needs to convince him to return home.

Of course, going home just means Agatha herself is in greater danger.

By the way, I don’t think I’ve ever read a book where the hero was laid up pretty much the entire time with a broken leg. That made for some interesting escapades.

At the end, even the twist on the assassin’s real identity caught me by surprise–twice.

All in all, this book gets a high rating from me for style, mystery, and romance.

I recommend it to readers looking for a great summer read that is clean (but not overtly preachy), funny, and where the heroine gets to save the hero just as much as he gets to save her.

Jen Turano is the critically acclaimed author of The Ladies of Distinction series. Her novel, A Most Peculiar Circumstance, was chosen by Booklist as a Top Ten Romance for 2013. She married her husband, Al, whom she met while she was working at department store in upstate New York, mere months after they’d met, to everyone’s concern. Twenty-something years later, she and Al are still going strong, proving the concern was all for naught. Her writing career began rather oddly, right when her son was in the third grade. Disgusted with a series they’d been reading together, Jen and her son set about writing a book of their own. When Jen settled on writing romance (individually), she snagged an agent and has been writing romance ever since.

When Jen’s not writing, she spends her time hiking around Colorado, socializing with friends and family, and taking great pride in watching her son, Dominic, turn into a remarkable young man. (For readers of A Change of Fortune, Dominic was the inspiration behind little Ben, which is why you won’t be surprised to learn Jen’s been slightly taken aback over the fact her son’s turned out so well.)

Read my review of A Talent for Trouble