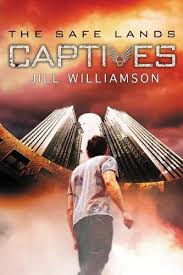 Can Levi uncover the truth hidden behind the Safe Land’s facade before it’s too late?

Mason, the one who doesn’t quite fit in. Omar, the one who thinks everyone hates him. Levi, the one with the  secret that could cost him everything.

These three brothers tugged me into the story from the beginning. Even when the sciency stuff had my brain spinning (It’s probably because of all the historical fiction I read that I was having that reaction!), I kept reading because these three guys have such a complicated relationship with one another — and suddenly they’re plopped in the middle of the biggest danger they have ever faced.

I’ve said it before, but Jill WIlliamson really does a slam-dunk job with voice. These guys really sound like guys (I say this with a straight face). It’s fascinating watching them adjust to life in this place that is so different from the one in which they grew up. I was just as drawn in and nauseated at the Safe Lands reality as they were (except, of course, for Omar, who throws himself into everything to escape what he’s done).

One of the sweetest things about the story for me was Levi’s courage. Left alone in his village after everyone is abducted? The chances of him sneaking into the Safe Lands slim to none and only slightly higher than his desire to spirit everyone out of the Safe Lands again? It doesn’t matter that the situation looks completely hopeless. He tries anyway. (Whether he succeeds or not I’ll leave to you to find out.)

And may I congratulate Jill for making nothing easy? I was expecting a quick fix for at least one of the super-dangerous circumstances, but not once did she settle for giving her characters an easy way out. This kept me reading.

What almost made me stop reading was the horror of it all. The Safe Lands is not all it’s cracked up to be, as Levi, Omar, and the others soon discover. This society glitters, but it truly is a “gilded cage,” as Mason says. The Safe Lands seems to offer everything one could ever want–and often that translates into drugs and immoral living.

Jill does a great job of tactfully portraying the lifestyle, but I still wanted to wince at a few sections. I could have done without some of the descriptions of vaping (high-tech smoking), but maybe that’s the point? To show how horribly wrong what seems so outwardly wonderful really is?

Because of the lifestyle choices made by certain characters and the (delicately written) procedure some of the women are expected to undergo, I would not recommend this book for readers younger than 16. Fans of The Hunger Games and Divergent, however, will want to put Captives on their to-read list. Not only is it Dystopian (complete with almost Doctor-Who-ish science), but it’s a story chock-full of characters who have their own goals and voices.

And the ending? I won’t give it away, but it just awesome. (I totally teared up on page 377.) I look forward to Book Two!

Jill Williamson is an author of all things weird. She grew up in Alaska with no electricity, an outhouse, and a lot of mosquitoes. Her Blood of Kings trilogy won two Christy Awards, and she recently released Captives, a dystopian teen novel from Zonderkidz. Jill lives in Oregon with her husband and two children and a whole lot of deer.

Want to read the prologue and first chapter of Captives?

Read my reviews of Jill’s other books: Replication and Go Teen Writers

Disclosure: The publisher provided me with this book to review. This post contains affiliate links. Read my full disclosure here.