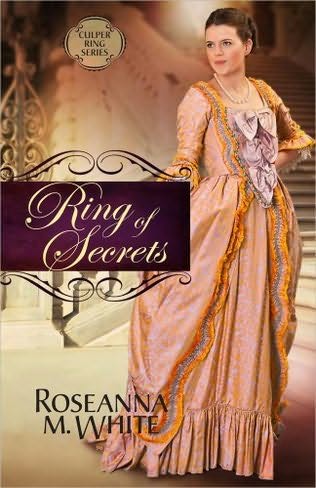 Winter Reeves is an aristocratic Patriot forced to hide her heart amid the Loyalists of the City of New York. If she’s caught, if she’s hung for espionage…well, she won’t be.

I enjoyed this book so much. What I loved first was that I was plunged immediately into Winter’s story. I knew right away she was keeping up a masquerade for a very important reason, that there’s danger and intrigue and an important cause…and there’s so much I didn’t know. So I kept reading.

In fact, I read the opening scene twice just to relish in the beauty of it. Not kidding.

Winter’s mask is a complicated one, but one she carries off so well. She has the entire city of New York believing her head is empty, when really she’s spun such a web of secrecy that everyone is being caught up in it and furthering her cause (spying for Washington) without their even knowing it.

I really admired Winter from the first. She’s experienced at pain and sorrow, but she doesn’t let anything stop her. She knows why she’s doing what she’s doing, and she’s not about to let anyone dissuade her.

May I say that the romance between these two is so very sweet? Bennet realizes as soon as he meets Winter that something’s up. The fact that he doesn’t see past her mask for a second is so romantic. Even better is the fact that Winter soon realizes he’s partly chasing her because she’s an intriguing mystery to him–which was a concern of mine at first, but, never fear, his affection for her soon finds much more solid ground.

The whispers of danger throughout the book are never overdone. The espionage is always very straightforward and believable. I think that’s what did me in and made me fall so hard for this book in the end. Everything seems like it really happened. I love that.

Let’s see… The back-and-forth between the characters is great. White’s writing style is simply superb and perfectly fits her genre. The story never sags. Winter’s tenacity kept me turning pages. Bennet’s pursuit of her is pristine and so well-developed…I especially enjoyed that he and his rival suitor became friends.

(I’m going through facets of the book in my mind, but the only thing I remember rolling my eyes over was that one point Winter has three men vying for her. Love triangles don’t bother me a mite, but three different men falling for one woman is a little much. But that’s more whining personal preference than anything else, so I’ll move on.)

White has created a cast of characters I’m going to very much enjoy following through the rest of the series. A spy ring that continues for generations? Perfect historical fiction.

My favorite part of the book was when Bennet had a secret of his own to share. That scene was so well-done!

This book is going on my favorite’s list. I highly recommend it!

Roseanna M. White is the author of two biblical novels from WhiteFire Publishing, and historical novels, including The Lost Heiress of the Ladies of the Manor series. She is the senior reviewer at the Christian Review of Books, which she and her husband founded, the senior editor at WhiteFire Publishing, and a member of ACFW, HisWriters, HEWN Marketing, and Colonial Christian Fiction Writers. Find her on Facebook, Twitter, and on her website.

Read my review of Roseanna’s other books: Love Finds You in Annapolis, Maryland // Ring of Secrets // Fairchild’s Lady // Circle of Spies // Whispers from the Shadows // The Lost Heiress

Never miss an update from me about new blog posts, books, etc.! See you in your inbox!
#LetterstoRosalie Dear Rosalie, I’d like to pu

Hi, my name is Rosalie and I’m 22 weeks old toda