Melanie Dickerson has done it again with her latest fairytale retelling featuring the medieval Hagenheim. With accurate historical details that plunge you into the story world, this book is bound to please readers of medieval adventure stories (like me!). A sweet love story ties the characters together, and Christian themes tie the plotlines together.

The one thing I wish I would have known ahead of time is that this book’s timeline runs concurrently with that of Melanie Dickerson’s other book in the series, The Princess Spy. Slight confusion over events gave way to me going, ah, I see what’s going on here. ;) 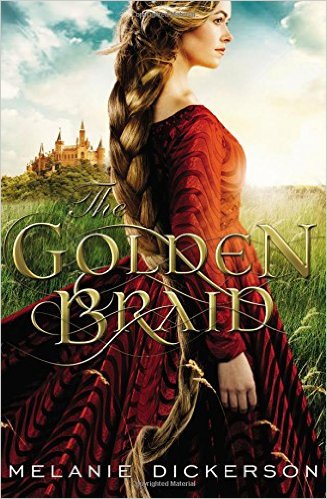 The one who needs rescuing isn’t always the one in the tower.

Rapunzel can throw a knife better than any man. She paints beautiful flowering vines on the walls of her plaster houses. She sings so sweetly she can coax even a beast to sleep. But there are two things she is afraid her mother might never allow her to do: learn to read and marry.

Fiercely devoted to Rapunzel, her mother is suspicious of every man who so much as looks at her daughter and warns her that no man can be trusted. After a young village farmer asks for Rapunzel’s hand in marriage, Mother decides to move them once again—this time, to the large city of Hagenheim.

The journey proves treacherous, and after being rescued by a knight—Sir Gerek—Rapunzel in turn rescues him farther down the road. As a result, Sir Gerek agrees to repay his debt to Rapunzel by teaching her to read. Could there be more to this knight than his arrogance and desire to marry for riches and position?

As Rapunzel acclimates to life in a new city, she uncovers a mystery that will forever change her life. In this Rapunzel story unlike any other, a world of secrets and treachery is about to be revealed after seventeen years of lies. How will Rapunzel finally take control of her own destiny? And who will prove faithful to a lowly peasant girl with no one to turn to?

Melanie Dickerson is a two-time Christy Award finalist and her book, The Healer’s Apprentice, won the National Readers Choice Award for Best First Book. She is a member of American Christian Fiction Writers (ACFW) and Romance Writers of America (RWA). . Melanie earned a bachelors degree in special education of the hearing impaired from The University of Alabama and has worked as a teacher and a missionary. She lives with her husband and two children in Huntsville, Alabama.

I received a free copy of this book in exchange for my honest review. This post also contains affiliate links. Read my full disclosure here.