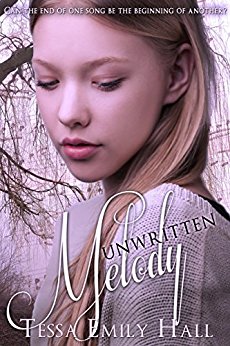 Tessa Emily Hall is establishing herself as an author capable of cultivating a wide range of emotions within the YA genre. While her debut novel, Purple Moon dealt with heavy subjects, Unwritten Melody delves even deeper. Tough topics such as abandonment, depression, and suicide plague Cassie’s life, but she dreams of breaking free.

Raised by her grandparents in a strict home environment, Cassie is a shy, quiet girl who just wants to be normal. Enter James, who appears on the surface to be a rising star in the music industry destined for greatness. But he hides a secret from Cassie…and so do Cassie’s grandparents.

Woven into the storyline are threads of betrayal and shattered trust. Then the unthinkable happens and loss creates a crater in Cassie’s very soul. I appreciated the way Tessa never shied away from the darkness of depression and grief. Unwritten Melody conquered far more than I expected: I had originally assumed that Cassie’s family would loosen their hold on her by the end of the book and that all would be well. What I found was an ending far deeper, and therefore filled with hope.

If you enjoy YA books that may make you cry but leave you with a satisfied sigh at the end, pick up Unwritten Melody by YA author Tessa Emily Hall! 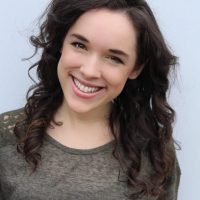 Tessa Emily Hall writes inspirational yet authentic YA fiction to show teens they’re not alone. The debut novel she penned at 16-years-old, PURPLE MOON (LPC Books) was a Selah 2014 Finalist. Her second YA novel, UNWRITTEN MELODY, released with Clean Reads fall 2016. She makes way too many lattes but can never read enough books. Her passion for shedding light on clean entertainment and media for teens lead her to a career as a Jr. Agent at Hartline Literary Agency, YA Acquisitions Editor for Illuminate YA (LPC imprint), and Founder/Editor of PursueMagazine.net.

When Tessa’s fingers aren’t flying 116 WPM across the keyboard, she can be found speaking to teens, decorating her insulin pump, and acting in Christian films. She writes in a small town nestled between the Blue Ridge Mountains and Southeastern coast. Her favorite way to procrastinate is by connecting with readers on her blog, mailing list, social media (@tessaemilyhall), and website: www.tessaemilyhall.com.

Read my review of Tessa’s debut novel, Purple Moon. Tessa has also written a guest post about fairy tales and what’s holding us back on my blog and she let me interview her here!

Disclosure: I received this book from the author. This review is my own. Read my full disclosure here.