I promise I won’t roll my eyes anymore.

For those of you who don’t know, I’ve written a novel. Several, actually. In 2013, I entered one into the Genesis, the big annual contest hosted by ACFW. When the list of semi-finalists came out and my name wasn’t on it, I sat down on the staircase and contemplated giving up this writing thing.

I’m so glad I didn’t. Instead, I made a list of agents to cold query and wrote this post for Go Teen Writers: Lessons from a Loser. I also queried one editor, who actually commented on that very post.

Who knew, 17 months later, that editor would email me with a contract attached. 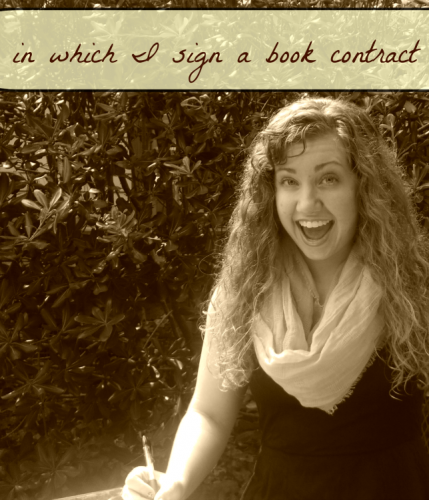 I want to hug that thing and praise Jesus for a dream come true. I want to blab to the whole world that this wasn’t supposed to happen at 22, only 4 years after I decided I wanted to write a book, only 2 years after I wrote the book whose title graces the top of that contract. I want to whisper to everyone and no one, hey, I have a book deal.

And, actually, it’s a series. WhiteFire wants all of it. The whole story. All three books. I could just explode into bubbles and starbursts at the very thought.

I want credit for deleting all the exclamation marks I used to create this post, so I didn’t overwhelm you, the one who would have to wade through them to get the whole story. ;)

Thanks for being excited for me! <– That one I just can’t help!