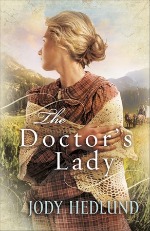 Though the beginning started out slowly, the tension gradually builds to an adventure-and-action-packed plot in The Doctor’s Lady. I read this book in less than twenty-four hours, drawn in by the development of the characters and details of what the trip West was like for the first female to cross the Continental Divide.

I enjoyed how Priscilla and Eli interacted with one another. They learned to trust one another achingly slowly, which at times made me want to shout, “Just tell her what you’re thinking!” But, of course, there is little reality in fiction if characters always agree with each other or give everything away. I really liked that Priscilla and Eli became friends before they ever fell in love–and it was a rocky road to that end!

Most fascinating was the spiritual growth that Priscilla and Eli experienced. The trip to Oregon Country taxed them both to their limits and there were a lot of scenes in which danger played a major role and my heart pumped fast! I was sorry to see the story end.

The slow beginning and the necessity of packing a months long journey West into a book caused me to get a “choppy” feeling every once in a while. I would have liked to see some of the scenes ended a little later rather than turning a page and discovering two days (or weeks!) had gone by.

Also, sometimes I thought the dialogue sounded unrealistic, but Eli’s words closely fit his background and if viewed in that light, are a good representation of his character.

All in all, The Doctor’s Lady was a very interesting book with a storyline like none I have ever seen before. The premise was entirely original and the plot fascinating at every twist and turn. I intend to check out Jody Hedlund’s other book, The Preacher’s Bride.

Jody Hedlund is an award-winning and bestselling author of inspirational historical romances for both youth and adults. As a busy mama-writer, she has the wonderful privilege of teaching her crew of 5 children at home. In between grading math papers and giving spelling tests, she occasionally does a load of laundry and washes dishes. When she’s not busy being a mama, you can find her in front of her laptop working on another of her page-turning stories. She loves reading almost as much as she loves writing, especially when it also involves chocolate and coffee.