Growing up, I always knew I’d go to college. My parents talked about it as if it were a done deal, so I always assumed it was.

But when I started eyeing a private Christian university near my home, how I was going to pay for it seemed less sure. Perhaps you or someone faces the same kind of question: How am I going to pay for my education?

The following is how I answered that question. I hope my story is helpful to you. :)

Each semester, I strategically took out a few thousand in interest-free loans. So I graduated with ten thousand dollars in debt.

That same summer, I paid it all off…

By God’s grace, first of all. Second of all, by a lot of elbow grease. A lot.

I started working when I was fifteen. I coached kids at a local gym.

This was the (first and) only job I had all through high school and throughout most of college–until I began my editing business the year before I graduated. In high school, I  spent my first few paychecks redecorating my bedroom and purchasing books to put on my new bookshelf. Bliss.

The rest of my paychecks I deposited. Saved. Hoarded away to support the dream of going to college. So by the time, I graduated, I had eight years’ worth of 12-hours-a-week, minimum-wage paychecks in the bank.

Commit to a plan

I really really wanted to study Communication at that private university two exits down the highway from my house. I set my sights on that degree and never looked back. I didn’t enjoy everything about my college experience, but I went after it because I wanted it. 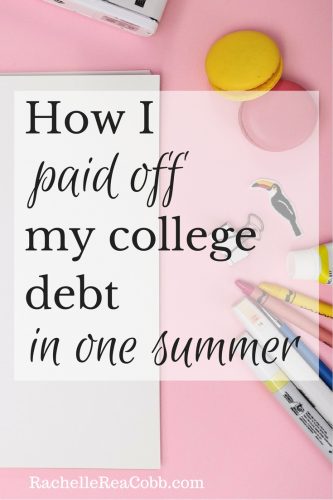 Here was the plan I committed to:

Instead of starting at the private university, I went to community college first.

Yep, that private university I’d set my sights on as my dream school? I didn’t go right away. I don’t mean I took a year off; I went to a technical college at first instead.

Two years later, I earned my AA and walked across the stage, having spent nothing but book-money at that school because it was friendly to homeschoolers with already-high grades and I’d earned scholarships.

I spent the summer between high school and starting freshman year at that community college writing essay after essay, filling out application after application. Every single scholarship I found and qualified for…I applied for. I must have applied for at least a hundred in those three months.

I honed my writing skills and practiced the discipline of working for what I wanted. Oh how I’d need those skills when I was staring at dozens of algebra problems at 11pm on Monday nights.

Here’s the thing, though: I didn’t win a single scholarship that way.

Even so, I’m glad I did it that way because I learned that 1) scholarships (which I always read as free money) is not indeed free money. There’s work involved and you don’t always get what you want even when you work at it. 2) I was going to have to depend on my grades.

I was really going to have to depend on my grades.

So I did. I made a 4.0 through college by investing a lot of sweat and tears (a lot of tears, actually). I learned how to make myself royally miserable the night before a exam–and the night after when I was sure this would be the one that bombed my college career.

Here’s the thing: I wish I hadn’t placed such importance on grades. They were important. They are important. My great grades proved to be 99% of the reason I graduated with no debt.

But I sometimes made my grades about me, a measure of my worth or value. A scale by which I judged myself. That was unhealthy; I’m very glad God stepped in and swooped me out of that way of thinking anytime I fell into it.

In the end, my grades earned me several scholarships. Those scholarships paid for a lot of my schooling. If we’re going by the numbers my mother and I once loosely tallied up, I earned a $100,000 degree from a reputable private Christian university that I loved and I paid only $10,000.

And it didn’t even feel like I paid that amount because I had saved the entire amount by the time I graduated–I had taken out those interest-free loans so that I could leave my bank account balance collecting interest as long as possible. As soon as those loans started collecting interest themselves, I paid them off.

One final point: I spent next to nothing in college. I went to a writer’s conference and on a mission trip to Costa Rica, but I didn’t eat out a lot or buy just anything I wanted.

I also did something many college freshman can’t do or aren’t interested in doing: I lived at home.

Those two exits I drove up the highway seemed like no hardship to me. To be honest, I wanted to go to my dream school but I had no interest in living in a dorm. I like my mother’s cooking, talking to her over breakfast, to my dad over dinner, and lying on the floor with my dogs in the evenings. Campus living held no appeal. And it saved me thousands of dollars.

So I decided to live at home all throughout college; I saved money; I ate better than a number of my peers; I was able to introvert at the end of the day and write three novels (!).

So that’s the story of how I graduated college last year and paid off my loans last summer, just before I signed my first book contract.

Are you headed to college?