This house has taught me a lot about growth.

When we closed on our fixer-upper in late March, I felt two both excited and nervous. Thrilled to be holding the keys to our first house but also anxious about the amount of work we were stepping into–and boy was it a lot of work! 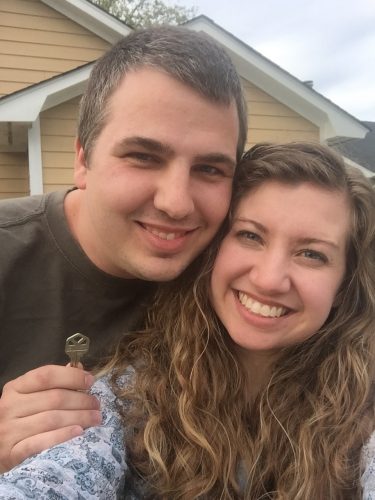 We didn’t move in for over two months, partly because we had that long left on the lease to our apartment and partly because of the ease with which we got things done here while not yet living here! It’s a lot simpler pulling up all the flooring when you don’t have furniture everywhere.

But working on our house while not yet living in it presented its own unique elements: for instance, we had to drive 15-20 min. (longer during peak traffic times) from our apartment to our house. We had to make sure we packed meals and snacks or we’d end up eating out. We owned only one portable lawn chair so we alternated taking breaks during long work days because couldn’t both sit down at once—this was especially interesting when friends and family joined us for big projects!

What projects have we tackled so far? In April, we went full deconstruction mode. We removed all the dirty folding closet doors (which I didn’t want impeding the brand-new floors we planned to put in) and shelving so we could then repair the holes in the walls. We ripped out all the old carpet and padding and even the peeling laminate flooring in the kitchen. 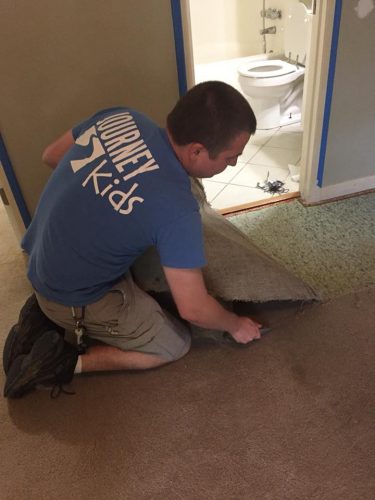 The concrete beneath would be our floor for another month. 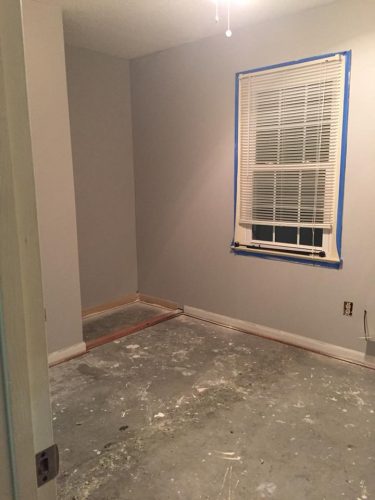 I learned how therapeutic it can be to rip stuff up and throw it away–and also how very dirty you can get when pulling up decades-old carpet!

Later that same month, so many friends came over to help us repaint. Without their help, we couldn’t have accomplished what we did! We painted almost the entire house in one Saturday and it felt so amazing to have at least one beautifying thing done, even if the floors were still uneven concrete at that point!

The light gray color we chose for the entire home brightened the place considerably, too.

The only two rooms we didn’t paint were the two bathrooms. We had deemed those early on to be post-move priorities, partially because the green in one bathroom was livable and the wallpaper in the other laughable but clean. 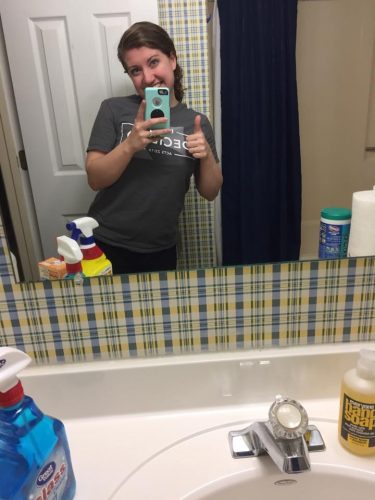 And because the tile in those bathrooms stayed, painting will eventually mean drop cloths and more prep than the concrete floors in the rest of the house could handle! Everywhere we spilled paint, we just mopped up and moved on!

In May, I started to feel the urgency of we’re moving in next month and wanted to wrap up as many projects as possible before all our furniture would occupy the space. Devin had so much only he could do that I decided to learn some things and expand what I could help with!

I discovered I’m pretty good at removing the tack strips left behind by the carpeting. I wore ear protection because a crowbar against concrete is sickeningly loud but enjoyed the immediate accomplishment of being able to clear a room in just a few hours.

Devin and I are so glad we added what had previously been a post-move priority up onto our pre-move list: the garage.

Half of the garage’s walls are unfinished plywood walls; the other half are finished. The plywood was the original grainy orange color, while the drywall ones were dirty white. We primed the plywood and repainted the whole thing white, and we even scrubbed and painted the garage floors a clean gray that really transformed the space! 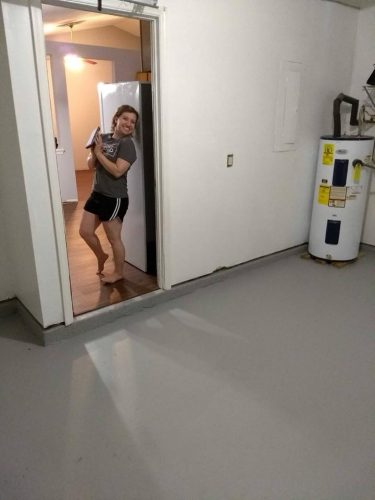 Also in May, we took on what was the biggest project to date! My mom and grandma helped us convert the countertops! In one weekend we sanded down the old laminate and applied auto-grade countertop paint. Coat after coat, the ugly wooden countertops (which had previously blended straight into the wood of the cabinets and floors) started to really pop! Folks think they’re genuine granite now and I could not be more pleased with how smooth they are and easy to clean, too!

The final May project took place on one Friday, when we outsourced the laying of the new floor to Home Depot. I’m so glad we hired out for this because, although we could have done it, I know it would have taken us way longer. Especially since both Devin and I are perfectionists. The team did a great job and finished in one weekday. 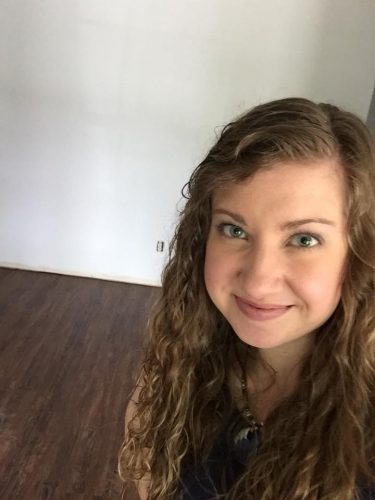 The difference was night and day! From concrete to a dark wood that looked great against the gray walls!

Moving In is Hard to Do

Moving Day was such a good experience for me. As a detail-oriented gal, I love having a place for everything and everything in its place. Anyone who has moved knows what I’m about to say:

Moving Day never goes according to plan! (Although I do recommend Kalyn’s tips!)

Since I’m a planner, I worked diligently to have the best schedule for the day. We’d start before it was too hot, load the trucks and cars of our friends who helped us—and the U-Haul we rented because of the threat of rain—and unload at the new house, hopefully in one trip.

Everything that could went wrong. The tool we needed to unhook our dryer was at the house so I left the apartment to go fetch that as soon as our first friends arrived. When I returned, our friends hadn’t been idly waiting for me! The entire apartment was empty, which was emotionally a bit overwhelming!

The night before, we had borrowed a trailer from a generous friend. Not wanting anything to happen to it, we bought a cheap lock for it so it would stay safe in our apartment complex overnight. But on Moving Day, as half of our friends headed to the new house with the U-Haul, Devin and I could not find the key to the brand-new lock.

So I tossed my house keys at a faithful friend and had her open the house for the move-in crew, and I waited in the parking lot with the trailer while Devin ran to store after store looking for bolt cutters so we could break the lock we’d bought.

By the time we arrived at the house, I received the second shock of the day: everything was unloaded! So in two blinks I had seen our fully furnished (albeit boxed-up) apartment emptied and then our empty house furnished!

When I say that this house has taught me a lot about growth, the first thing that comes to mind is the generosity of friends.

We could not have accomplished all that we have in our fixer upper without friends and family members loaning us countless tools and countless hours of time. It has truly been a group effort!

Have you ever had a fixer upper (or attempted house projects)?

Disclosure: Some of the links in the post above are affiliate links. This means if you click on the link and purchase the item, I will receive an affiliate commission. Rest assured, I only recommend products I use personally and believe in. Read my full disclosure policy here.