This is part of a story series that can be read in any order. Click here to read more posts. Read on for what I would say if I could write a letter to myself to be read on March 4, 2015, the day before I met my Devin…

You’re about to meet him.

Too soon to tell, but this weekend you’ll wonder. Oh, not tomorrow. Tomorrow you’ll be absolutely oblivious. When you open the door at Bible study on that ordinary Friday night and see him standing there, you will at first think it’s your friend Ashlyn knocking–that will be the reason you go to open the door at all.

It won’t be Ashlyn. It will be a man a whole lot cuter than his Facebook picture. He’ll send your heart into your stomach the first time you meet him because Spirit will say there’s just something about this one. 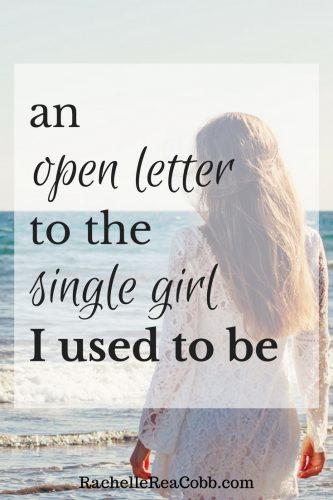 Don’t be afraid when he brings up that he would like to discuss boundaries. You will say specifically that hugging you is okay. And he will respect that, because he was thinking the same thing. He’ll go on to ask your permission first before he does so.

Warning: you’ll get it wrong. For that first hug, you’ll tiptoe and not quite reach him. This man of yours, he’s so tall but says he doesn’t mind how tiny you are. He doesn’t.

You’ll figure out how to hug him, promise. It won’t take you long. Where you find you fit, you can hear his heartbeat.

Dear single girl, wait for this. This man who woos you with flowers, who holds your door, who opens the truck door for you every single time without fail. This man who talks intention and marriage and movies and Marvel. This man who watches Pride and Prejudice and who reads Passion and Purity with you.

He is worth the risk.

If I could tell you just one thing, that would be it: He is so very much worth the risk.

Your stomach will cramp the worst you’ve ever known on the night you first say yes to him. Say yes to going on a first date the next day three weeks after you met.

Your eyes will well with how weighty it all is–the chance that this might be your Forever. The fear that it might not. Your heart will hurt for weeks because you want to trust him but you’re scared to.

He is more than you think. He waits. He waits three months to ask you to be his girlfriend. He waits two weeks after you’re Official to hold your hand. Even though you tried to make it easy for him and held your purse in your other hand…

He is patient like that. He is fiercely loyal. Protective. But never smothering. He claims you as his girl in front of his friends, your friends, on Facebook, and in his prayers.

He’s a man who likes you and tells you so and tells you why. He calls you beautiful and talented. He admits your being a romance novelist intimidated him slightly. You write love stories.