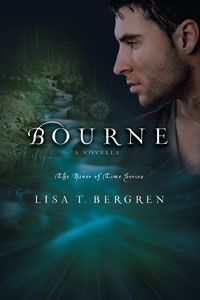 I’ve been eagerly awaiting this next chapter of the River of Time Series ever since I finished Torrent and realized that more was on the way! I was so excited when Lisa T. Bergren announced that there would be an e-novella!

Bourne starts right where Torrent left off. In the middle of adventure, drama, and action!

I must confess I was a little nervous that perhaps Bourne wouldn’t have the same feel of the other three books ~ that maybe something would have changed or that I wouldn’t like Lia’s point-of-view. Nah. My fears were unfounded and my expectations surpassed! I finished Bourne in a day and Lisa T. Bergren had me cheering, sighing, laughing, wincing, and rooting for the characters the whole way through ~ as usual!

The turmoil, the triumph, the laughs, the life in this book just dazzle from he first word. I loved every minute of this story! My favorite part was how I felt so much ~ Gabi’s realization that she bears certain responsibilities, Lia’s wrestling with seeing a different side of Luca ~ all the heartache and joy just blasted from the page (er, screen).

My only complaint is that Bourne is about 1/3 the size of the other three River of Time novels and I was so not ready for the ending! That said, it was a great ending. At one point, I was reading through my fingers because I was so nervous…but that’s all I’ll say! No spoilers!

Lisa T. Bergren is the best-selling, award-winning author of over 30 books, with more than 1.5 million copies sold. Lisa’s time is split between managing home base, writing (including a fair amount of travel writing), consulting and freelance editing (with a little speaking here and there). She’s married to Tim, a liturgical sculptor, graphic designer and musician. They have three kids–Olivia, Emma, and Jack. The Bergrens make their home in Colorado Springs, Colorado.