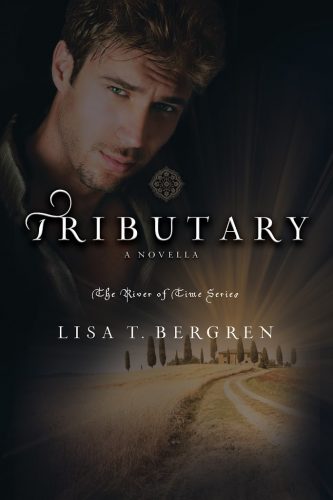 Tributary picks up a year after Bourne…

Lia struggles to overcome the fear that constant battle has heaped upon her…
Gabi and Marcello face an unexpected crisis…
and Lord Greco just may be ready to leave the grief and loss of his past behind him, so that he might grab hold of the future…

What did I love? Um, the whole thing. But I’ve said that before, haven’t I?

Specifically, I loved the plunge into Lia’s point-of-view (begun in Bourne and more fully developed in Tributary). I got to know Lia a little more. Loved that. In addition, I also got to read from a few other character’s point-of-views, as well. This took some getting used to and got a little confusing at times, actually, as third-person was used for all but Lia. Sometimes I wasn’t sure whose head I was in until a paragraph or so deep…but I liked the pull of each character’s personality.

Another thing I loved was that the adventure, the romance, and the authenticity that the whole series has (these are two twenty-first century teenage girls dropped into medieval Italia, what else can I say?) is just as evident in Tributary.

Lia, Gabi, Marcello, Luca, Lord Greco, and a whole new dynamo of a character (who starts the book) are back in full form, vanquishing foes who would rather see them dead, and by no means, perfect. The Christian undertone to the book is priceless. Some lines made me cock my head and think for a moment

…before I had to rush back to reading so I could find out what happens next!

As I’ve said before, this series has a little something for everyone. Fast-paced action that glues the book to your hands. Romance that makes you sit back and say awwwww. Even evil and enemies that you love to hate. Lovers of the rest of the River of Time series will love this newest addition! It does not disappoint.

Lisa T. Bergren is the best-selling, award-winning author of over 30 books, with more than 1.5 million copies sold. Lisa’s time is split between managing home base, writing (including a fair amount of travel writing), consulting and freelance editing (with a little speaking here and there). She’s married to Tim, a liturgical sculptor, graphic designer and musician. They have three kids–Olivia, Emma, and Jack. The Bergrens make their home in Colorado Springs, Colorado.