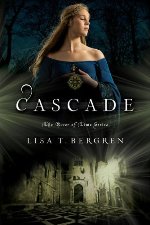 This review has been a long time in coming. Ever since I first read Waterfall, I have been enthralled with Lisa T. Bergren’s River of Time series. I am so glad that I won Waterfall in a contest because believe it or not, it probably would have been awhile before I picked it up on my own.

But I would have sooner or later.

As I was telling a friend the other day, Waterfall , as well as the rest of The River of Time series, has everything that I love in a good book. One, it’s part of a series. Which means that, yay, I don’t have to say goodbye to these characters anytime soon! The fun continues!

Two, it has an amazing looking cover. I mean, really, who doesn’t want to have that beautiful picture beckoning from their nightstand.

Third, Waterfall, Cascade, and Torrent each combine all of my favorite genres. Historical. Romance. Fantasy.

Now since this review is technically of Cascade and I’ve so far raved about The River of Time series as a whole, let me tell you about why I liked Cascade.

The first reason is that I loved Waterfall sooooo much. I had no sooner read The End in that fabulous beginning to the Bettarrini’s story when I went on Amazon.com and pre-ordered Cascade and Torrent. I can honestly say I’ve never been that eager to know that a book was on its way before.

The second reason I loved Cascade is that it could stand on its own. Have you ever read a trilogy and been so disappointed with the second book, like it only seemed like a bridge, the author’s way of getting you from Book A to Book C?

And I don’t call a book Perfect with a capital P lightly, ya’ll.

The only thing that I can possibly say that I didn’t like about Cascade was that it ended with a fabulous, thrilling, heart-stopping, leave-me-gasping cliff-hanger. Entirely appropriate, but, oh, how tortuous! Thankfully, I knew that a copy of Torrent was already making its way to my eager hands. Unfortunately, I had to wait a couple more  months for its release (but Amazon.com was generous to send it earler than I expected. I saw the box when I came home work and squealed.

Yes, squealed. Cascade is unlike other YA fiction I’ve read.

There is a faith element threaded through this book that I would have liked to seen explored more, but I think that the author did a beautiful job of allowing us to see Gabi’s inner struggle with believing, while not beating us over the head with the fact. Honestly, I’d rather a book err on the side of caution than be out-and-out preachy.

Faith comes through strongest in the rocking story as you’re transported from modern-day to 14th century Italia. Bonus: you see medieval Italia through the eyes of a 21st century teenage girl. How cool does that sound?

One word of advice: don’t start reading until you have all three and a long weekend.