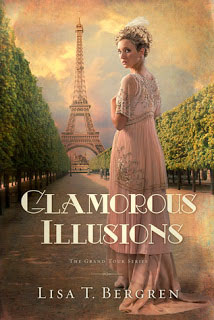 Cora Kensington learns she is the illegitimate daughter of a copper king, and her life changes forever.

This book surprised me in many ways. I went into it thinking that Cora would be a spoiled, rich girl setting out on her Grand Tour with misconceptions–and that those misconceptions would be dashed.

Wrong. Cora is a small-town girl (woot!) who has dreams and plans and disappointments. In other words, she is the very opposite of spoiled and rich at the beginning of Glamorous Illusions.

But things get glamorous very, very quickly. She’s plunged into a new life she must reconcile with her former one (and is it truly former or is this a mere interruption to an otherwise placid existence?). She must reconcile a new family and a new identity with what she has always known. It’s a fascinating scenario–I was utterly pulled in.

Cora struggles with her identity, but she is an endearing character with a strong personality. And she knows what she wants (most of the time). In one scene, she comes across as a little bit of a flirt, which made me lose a slight bit of respect for her, but all is resolved quickly, and even Cora recognizes that her behavior was less than glamorous. She’s human. I kind of like her more for that, in the end.

After reading (and loving) Lisa’s YA River of Time series, it was fun to read some Historical Fiction from her. And Cora’s POV is written in first-person, too, which made me quite happy!

Read my reviews of  the rest of the series: Grave Consequences // Glittering Promises

as well as my favorite series of Lisa’s: Waterfall // Cascade // Torrent // Tributary // Bourne