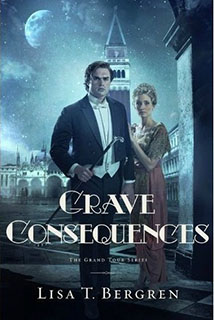 For Cora Kensington, the journey of a lifetime takes unexpected twists.

As is often the case with middle books (the novels that hinge the first and last books in a trilogy/series), I was a little afraid that this one might sag slightly.

I should have known better. Just as I discovered with Cascade (the center book of the River of Time series by Lisa T. Bergren), Lisa’s middle books are in no danger of lagging.

In fact, I think I read this book the quickest of all of the Grand Tour series (although that might have something to do with my not wanting Glittering Promises to end!). I thoroughly enjoyed the continued tests Cora’s character endures–and how she weathers each of them with a mixture of grace and honest mistakes.

One thing that surprised me is that the level of intrigue and danger that accompany the Kensington family throughout their Grand Tour in no way diminishes in this book–like I feared that it might after Glamorous Illusions.

Instead, the stakes are ratched up a notch, making for a thrilling read.

She’s the kind of grounded girl I’d love to have for a friend, although just enough foul play abounds around her that sometimes I’m quite glad I’m only reading about her life! I highly recommend this book to lovers of historical fiction looking for a tale rife with danger and glowing with heart.

Read my review of the other books in the series: Glamorous Illusions and Glittering Promises