As we hail the approach of New Year’s Day, you may be writing resolutions, making goals, and deciding on deadlines. Me, too. But I also did something I do every year: pick one word.

If you’re like me, you want to do a number of things this year. And it would be so easy–good, even–to plan for a number of resolutions and leave it at that. But what if instead you chose a theme for the next 365 days? One idea that would carry us into whatever the new year holds? One word? 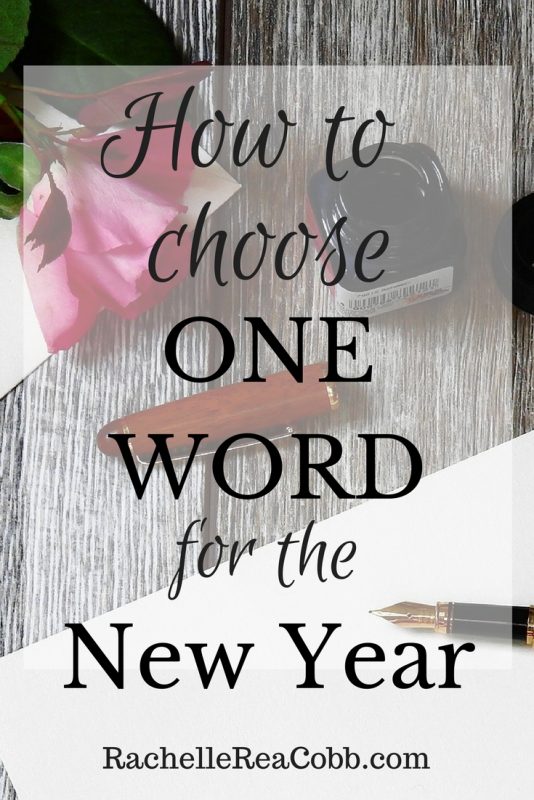 Eight years ago, I did just that and I’ve been addicted to the #OneWord movement ever since.

You see, I rarely set New Year’s Resolution’s, but for the past eight years I’ve chosen to pick one word to hold close for the next 365 days, all year long, in an effort to bring continuity when life so rarely seems as linear as time itself.

Next year, I want to do a lot of things, like write and blog and read more! But most of all, I don’t want to let a single day in the New Year go by without focusing on the important things, like my husband and my people and my God. I want to truly invest in others without forgetting to pursue joy each and every day.

If you’d like to do the same, here are some tips for how to pick one word for your new year:

Let me know in a comment what your #OneWord is!

And in case you’re curious what my previous seven words were, here’s the list and a brief explanation. (Because, really, how does one sum up a year? So much heart-growth happens.)

After all, I believe that words can not only tell stories, they can become them.

Why? Some asked me. Why poem? The answer, to me, is simple:

There, I said it. Poetry-lovers, I apologize, but I own no books of poetry, only novels and nonfiction and memoirs that all read like poetry to me. That are lyrical and lovely and transport me away to another time, another place without confusing me. My brain just isn’t made for poetry.

Now that I’ve thoroughly confused you as to why then I would choose that as my word, let me explain. My brain just isn’t made for poetry, and therefore neither is my hand. I cannot write poetry to save my life. I’m terrible at it.

2016 was the year I knew I couldn’t write, couldn’t control.

Therefore, it was the poem only God could write.

And I was right. (See what I did there? That, folks, is why I’m terrible at poetry.)

2016 was the year I got engaged, released my third book, got married, moved out of my parents’ home for the first time, and expanded my business. It was a beautiful poem beginning to end, written by the hand of God.

I’ve said this for years in a row: I think this year’s word may be the bravest of them all. And I think I should say that every year, because if my #OneWord isn’t stretching, pulling, challenging me, then it isn’t much of a word at all. I don’t need another resolution. I need an anthem I can chant to myself in the grocery store checkout line, something to whisper as I work to remind me that drudgery is the heart of difference-making. Choosing #OneWord is a discipline that I want to change me.

So the change I want to see this year is Cherish.

Because there truly is so much to cherish. This new husband that I have, who is so good to me. The new opportunities my business is affording me. Etc.

Do you choose One Word?